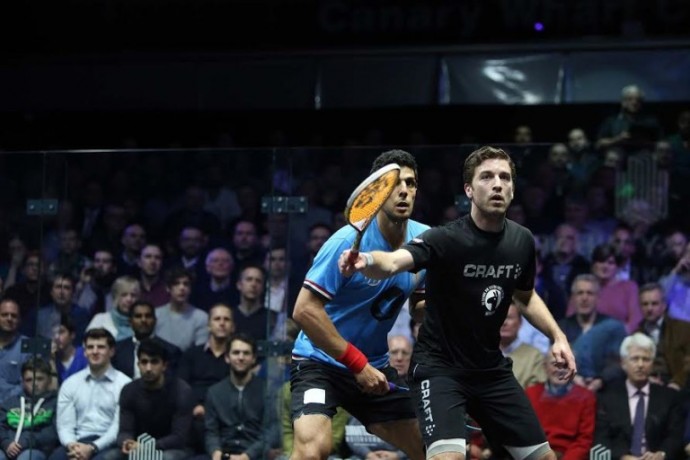 Black Knight's Mathieu Castagnet won the Canary Wharf Classic last week, with stunning displays throughout the tournament and eventually capping off some fantastic squash with a win over top seed Mosaad Omar. Of the achievement Castagnet said “I can’t believe I have won this title tonight,” said Castagnet. “This is such a prestigious tournament and to put my name on the trophy with players like Thierry Lincou, James Willstrop and Nick Matthew – some of the best players in the world – is a great pleasure for me and a huge achievement."
Mathieu had recently been defeated by the very same opponent a few weeks back and the 29 year old added “Omar and I had a great battle in Chicago a few weeks ago when he won 3-1 but today it was my turn. I tried to be more aggressive and play to the front of the court and force mistakes from him". And force mistakes he did, as he cruised to a 3-1 victory, the concentration and determination of the France international was noticeable - not making a single error in the entire match.
“He came back very strong in the first game and in the second he started to come back again and I was worried. But getting that point to go to 7-4 was important mentally and I am happy with how I played" he added.
“I have to thank my family, my girlfriend, my coaches and my sponsors for helping me all the way and thanks to the crowd here as well who have been amazing all week.”
We'd all like to congratulate Mathieu on his win and are very excited to annouce that a Castagnet signature version of his ion Cannon PS will be available very soon. Have a closer look at the classy racket here: