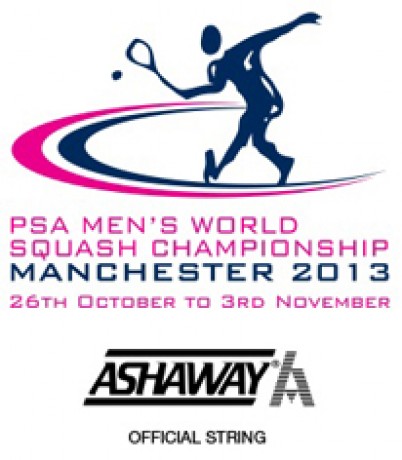 SuperNick® XL, PowerNick® and UltraNick® Are Strings of Choice at the 2013 Men's World Squash Championships

Ashaway Racket Strings has been named the Official String Partner for the 2013 Men's World Squash Championships. The tournament will be held from October 26th to November 3rd in Manchester, England, where 64 of the world's top professional squash players will compete for a £200,000 prize.

"Ashaway is always eager to support professional and amateur squash whenever we can," said Steve Crandall, Vice President of Ashaway. "And to be associated with prestigious events like the British Open, the World Championships, and the Grand Prix is an honor as well as a pleasure."

Ashaway will be represented at these events by its longtime UK distributor Goode Sport. According to Goode Partner, Paul Smith, stringers for the events will be Liam Nolan of the UKRSA and Nick Down of Smart Racquet. They will use Ashaway Electronic SM7900 machines.