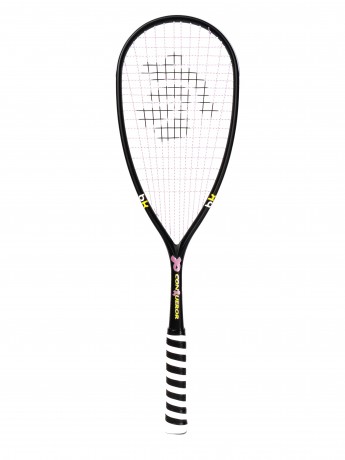 Life-long squash fan Kathleen Lamb has launched a brand new squash racket, the 'Conqueror', as part of the 'Conqueror Project' - a website and series of fundraising initiatives dedicated to helping support the work done in breast caner research centres around the world.
A keen recreational squash player in her youth, Kathleen was diagnosed with breast cancer in 2014, six years after suffering a ruptured brain aneurism, and has vowed to help battle the disease the only way she knows how - head on!
With support from racket manufacturer Black Knight, Kathleen has launched the Conqueror - an all-graphite 130g racket made with Ashaway SuperNick XL - that will see $10 from every sale donated directly to breast cancer research as she aims to raise a total of $100K.
The racket itself can be purchased through the ‘Conqueror Project’ website - http://www.conquerorproject.com - which also contains a list of participating retailers while Conqueror quick dry athletic t-shirts can also be purchased.
100% of the funds raised will be donated directly to breast cancer research labs.
“I played squash when I was at university but I was never very good, though I enjoyed going for a cold one after a sweaty game,” said Lamb
“Then, in 2008, I had a ruptured brain aneurism that left me on life support in a coma for six weeks. I survived but was left paralysed on my left side, then the grim reaper took another swipe at me with the breast cancer.
“I decided to turn a horrible thing into something good. My employer (Black Knight) and I sat down and designed a squash racquet with the model name ‘Conqueror’ because we are hoping to raise enough money through the sale of the ‘Conqueror’ to help the researchers find the answers that will conquer breast cancer."
With over 1.5 million people being diagnosed with cancer worldwide, it is a disease that has a firm grip on people’s heartstrings. As such, the project has garnered substantial attention and has grown since its inception, resulting in the first ever Le Black Knight Conqueror Squash Challenge taking place in January at the YMCA in Montreal.
The event was a roaring success and proceeds from the tournament, in addition to the ‘Conqueror’ racket sales, were donated to the Segal Cancer Centre and Cedars Cancer Institute. Women’s World No.32 Samantha Cornett and former player Alexandra Norman also played in an exhibition match in front of an enthusiastic crowd.
With Lamb spearheading the project, squash looks to be playing a big part in the fight against breast cancer.
For more information in the project, please go to http://www.conquerorproject.com/
http://goode-sport.co.uk/buy/conqueror/