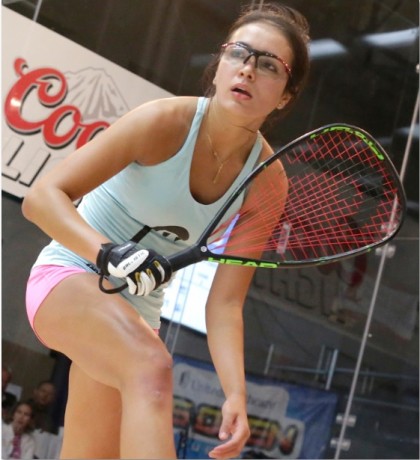 Ashaway, RI – Ashaway Racket Strings has signed Cliff Swain protégé and rising racquetball star Maria Jose Vargas to its roster of sponsored players. Since turning pro in 2012, Bolivian born Vargas has had a rather meteoric rise through the ranks of women's professional racquetball. She was named Rookie of the Year by the Ladies Professional Racquetball Tour (LPRT) in 2013, and finished the 2013-14 season ranked #3 in the world. Although terms of the agreement were not disclosed, it was noted that Vargas is a dedicated user of Ashaway's PowerKill® 17 String.

"Maria is the first real up-and-coming international star we have signed to our racquetball sponsorship roster," said Ashaway's Steve Crandall. "She's an aggressive physical player who hits the ball hard, and will be an excellent ambassador for our PowerKill strings. She's also a national hero in Bolivia, which is a key area for growth in the rapidly expanding South American racquetball market. So it's all good and we're very pleased to sponsor her."

For her part, Vargas said she has been, "a big fan of Ashaway strings for many years," and is "very excited to partner up with such a great company." She added that after switching to PowerKill 17, she has been, "able to generate more power than ever while maintaining incredible control," and also breaks fewer strings, "which makes me more confident when I play."

Vargas capped her amateur career by playing for Bolivia in the 2011 Pan American Games, earning bronze medals in women's singles and the women's team competitions, and by winning the 2012 World Junior Racquetball Championship in Girls' U18. As a professional so far, Vargas has won the 2014 Pan American Championships in singles, and earned the silver medal in doubles competition with Véronique Guillemette. At the 2014 World Championships, Vargas was a bronze medalist, losing to #1 ranked Paola Longoria in the semi-finals.