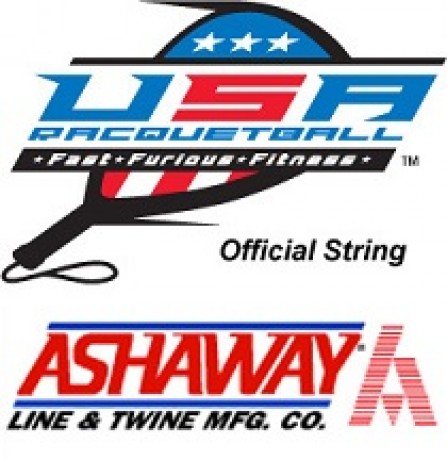 Ashaway To Continue As Official String Of USA Racquetball

Ashaway, RI – Ashaway Racket Strings announced today that it has extended its contract to remain the Official String of USA Racquetball through the end of 2013. Although specific terms were not disclosed, extension of the agreement reaffirms Ashaway's long-term commitment to support and promote the sport of racquetball, and ensures their presence at key events and tournaments such as the US Open, Oct 2 - 6, 2013 in Minneapolis, MN.

"As the only US manufacturer of racquet strings, we are proud to continue our longstanding relationship with USA Racquetball," said Steven Crandall, Vice President of Ashaway Racket Strings. "Over the years, USA Racquetball has done an exceptional job of organizing and showcasing the best that racquetball has to offer, and it is natural that Ashaway should continue to do its part in raising the visibility of this exciting sport."

USA Racquetball is the National Governing Body for the sport of racquetball. Recognized by the United States Olympic Committee, it is committed to excellence and service to its members. In addition to providing the infrastructure and organization for racquetball, USA Racquetball also provides competitive opportunities for members and enthusiasts through the coordination of racquetball organizations, development and administration of rules and programs, sanctioning of events, and the development of teams for international competition, such as Team USA.

"We are excited to continue our partnership with Ashaway as the Official String of USA Racquetball," said Steve Czarnecki, USA Racquetball Executive Director. "Ashaway has a long and proud tradition of producing quality strings that can benefit racquetball players at all levels."

Ashaway is best known for manufacturing world-class racquet strings used by many of the world's top professional players. Ashaway is the only United States manufacturer of racquet strings, and offers a full line of racquetball strings, including its popular SuperKill® nylon and KillFire® aramid hybrid lines, as well as its most recent Zyex®-based UltraKill® family which allows players to choose the precise combination of power, durability and feel that is right for their game. Available in 16, 17, and 18 gauge thicknesses, each UltraKill string is built on a specially constructed Zyex polymer core engineered to provide specific performance characteristics while maintaining tension for longer string life.